Type that responds to society’s changes

A new Mincho typeface that is relevant for today – TP Mincho

Type Project now has another “trunk” that stands side by side with AXIS Font. It is TP Mincho. “Once I’d made AXIS Font and it was doing well, more and more people started saying, ‘Don’t you have an AXIS Font Mincho typeface?’ If there’s a demand for something, you’ve just got to make it, right? But I know that it takes me five years to produce a font on my own. To keep up that motivation for a five-year period, I’ve got to come up with aspects that have never been seen before, or I won’t be able to go on. So, I felt that I had to have concrete tasks and goals right in front of me. Otherwise, it would just be too unclear, and I wouldn’t be able to carry on like that for five years.”

When you began developing TP Mincho in 2009, what sort of tasks or issues were you facing? “One thing was that no horizontal layout-specialized Mincho typefaces had come out yet. And another issue was that the trend in font usage at that time was increasingly to go onscreen, so already there were fewer Mincho typefaces available.” To Suzuki, the situation had already worsened to the point that it seemed too late to correct it. “We’d just taken it for granted that Mincho typefaces always played a central role. But when cellphones and smartphones started coming out, before you knew it, sans-serif typefaces were mainstream, even in Europe and America. I knew that it might be too late, but because Mincho typefaces have certain emotional aspects and a formalness and gravitas that only they can convey, and I decided that there should be a Mincho typeface that was adapted for the new environment that is the screen.” 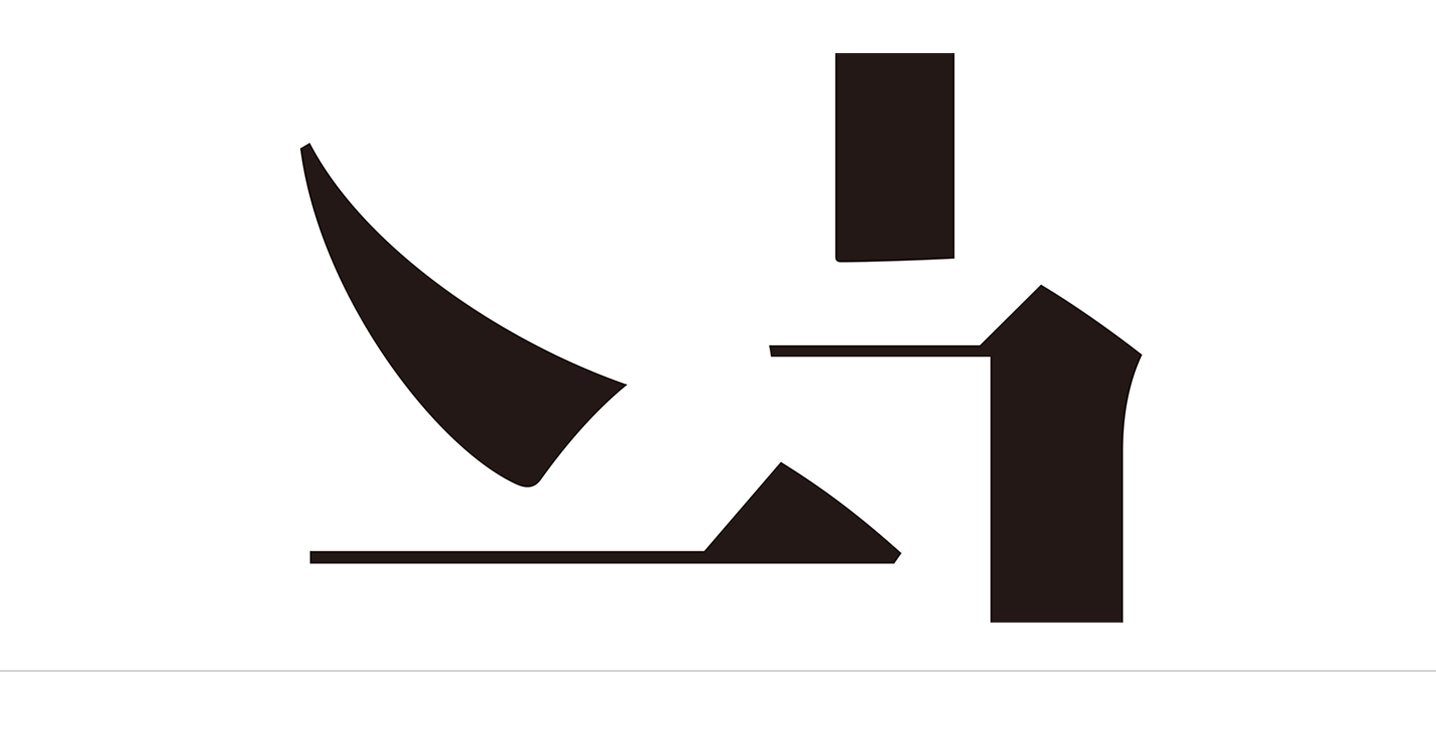 Part of a kanji radical in TP Mincho. The shape of the uroko (bottom right) has a gentle downward slope that juxtaposes with an abrupt rise. This intermingling of sharpness and softness in the design is a defining characteristic of TP Mincho.

Optimized for double-byte character, solid typesetting in horizontal layouts, with a focus on readability for internet and other screen media (top). An elegant design with alphanumeric characters that are sharp yet gentle (bottom).

Suzuki explains that while TP Mincho was conceived in response to requests for ‘a Mincho typeface that fits AXIS Font’, throughout its development he was always concerned not only with how it would look in paper media, but also with how it would work as a Mincho typeface used on screens. “If you look at how Mincho typefaces have been used until now, they’ve always been treated as particularly suited to long text situations, and for both horizontal and vertical use. There have been all kinds of ways of thinking about this typeface, and images that people have of it and so on – for example, that the kana characters look prettier with slightly smaller character faces, or that they create more classical and emotional impressions. When it comes to onscreen situations, however, the pieces of text tend to be shorter, and the messages they are meant to convey get fragmented. I was aware that Mincho typefaces intended for vertical layouts could still look fairly nice when set horizontally. But when Mincho typefaces are seen onscreen, even if they look pretty in a small character size, they lack stability. That’s how it has always felt to me. And I’d say that this is why people unconsciously choose Gothic typefaces – because they have a sense of stability and good balance.”

When one tries to imbue Mincho’s state or appearance with ‘stable reading’, the typeface loses its emotional beauty. On the other hand, as Suzuki points out, when considering horizontal layouts for display use, the readability and the sense of stability will always be conditions that need to be addressed. “After that, the main thing is its flexibility when using onscreen. The proportions, adjusting it horizontally and vertically, and having it fit both big monitors and small monitors. You won’t get anywhere if you ignore the diversity of the environment. One might even say that users being able to change font characters at will means that the situation is one in which the maker’s control no longer has any effect. With paper media, the professional sets everything up in the best possible way, and a fixed product is provided by way of the process of printing; but onscreen, the user can have more freedom to choose how the characters will appear. In comparison to printing, in onscreen situations the maker is less able to limit the way the characters are used.”

TP Mincho, with its concept of allowing for variations by adding weights and changing horizontal stroke thicknesses, is Suzuki’s character-based approach to dealing with this situation. He made one variation, High Contrast, which has horizontal strokes that are narrower than the vertical strokes, like a conventional Mincho typeface, and two others that have less difference between the thicknesses of their vertical and horizontal strokes, Middle Contrast and Low Contrast, respectively. By enabling choice of contrast, as well as reproducibility and display resolution, Suzuki paved the way for optimal onscreen type expression. 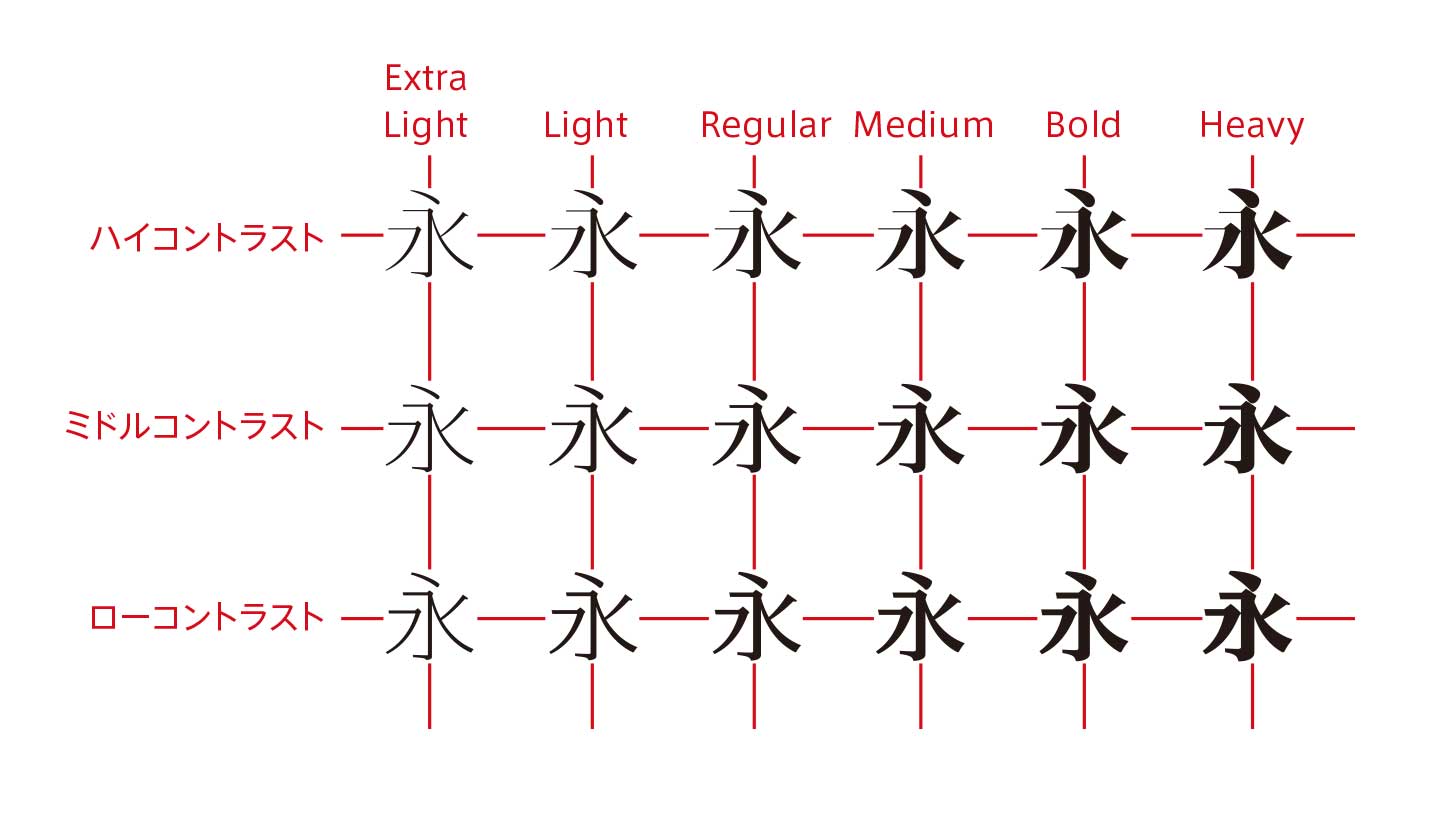 Optimized for digital devices and horizontal layouts. A Mincho typeface for today – TP Mincho
In contrast to AXIS Font, which is composed using the axes of weight-plus-width, TP Mincho evolves on the axes of weight-plus-contrast. Contrast refers to the difference in line thickness between the vertical strokes and the horizontal strokes; High Contrast has the wide vertical strokes and narrow horizontal strokes of a conventional Mincho typeface, while Low Contrast is provided with a thickness against the horizontal strokes, like the so-called yokobuto (heavy) Mincho. Equipped with both a Mincho typeface’s elegance and a Gothic typeface’s readability while retaining its original design concept, TP Mincho can respond to all manner of changes in environment by way of user selections made in accordance with the given purpose or situation.

The development of TP Mincho was launched with the three contrast variations of High Contrast, Middle Contrast and Low Contrast; now, with its development as a FitFont as well, even more requests can be fulfilled. In effect, TP Mincho has become another “trunk” of FitFont, that stands side by side with AXIS Font. “The Contrast variations make it possible to set contrast in tandem with resolution, and also allow for choices based on purpose or preference. TP Mincho and FitFont work together as one proposal for handling diverse onscreen environments.” 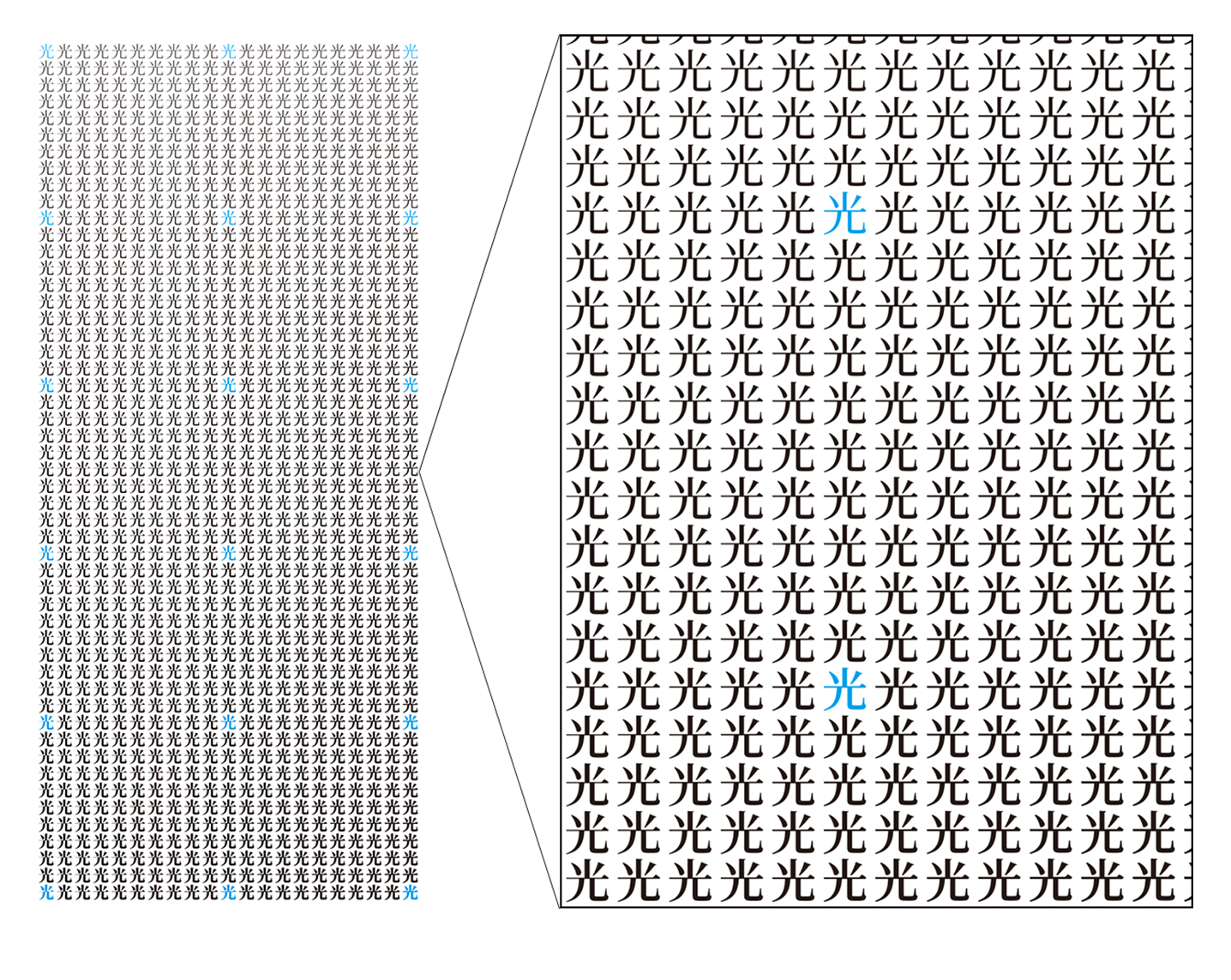 TP TP Mincho FitFont variation chart. The blue characters are for weight and contrast settings that correspond to the TP Mincho being offered as a product version. Weight and width variations of AXIS Font’s product version are original, and have no correspondence with FitFont.

This is another example of “a typeface intended for onscreen usage” – a font that Type Project has been working on since 2008 that is specialized for screens on car navigation systems and other onboard instruments. While driving, not only does one have to pay attention to the direction the vehicle is moving, and behind it as well, using the sideview and rearview mirrors, but also one has to keep an eye on the information displayed on the car navigation system. Driver’s Font, which was developed jointly with DENSO Corporation, is designed with the premise of providing necessary information instantaneously, allowing for high visual recognition even when it is not possible to focus on the screen. With its compact outlines and restrained finishing touches, it is truly the ultimate “at-a-glance” font. Here too, Type Project’s stance of using type to resolve the changes in our societies and environments is evident. 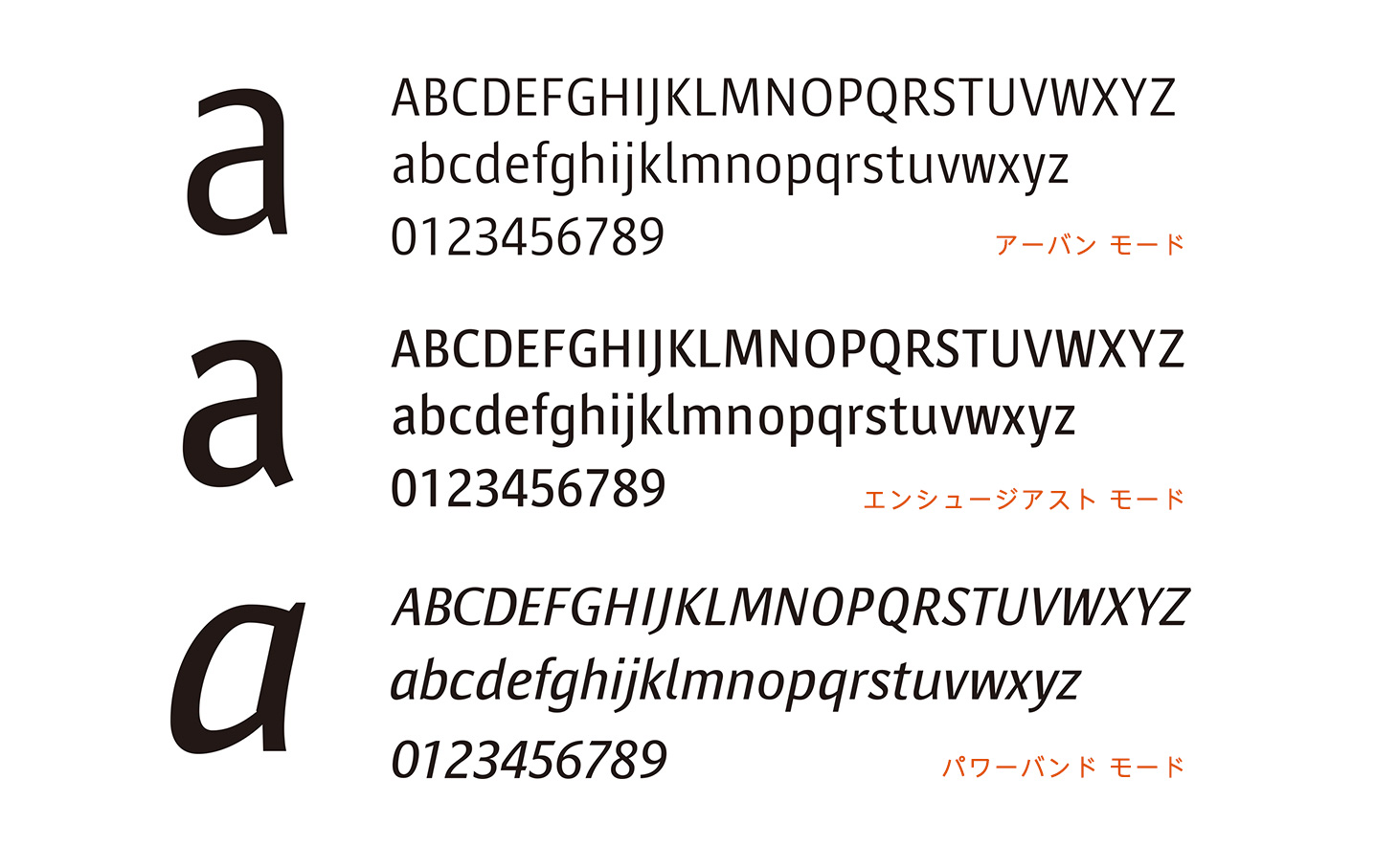 Driver’s Font
Driver’s Font is the result of a joint development project with DENSO Corporation. In search of the best possible text characters for onscreen use from the viewpoint of vehicle drivers, who cannot focus on only a single point while driving, a program of carrying out repeated hypotheses, trial production and testing was carried out over a three-year period. Driver’s Font’s compact outlines and subtle differences in intensity are clearly visible whenever they need to be, while in every other respect this typeface has become one that blends in with its background.