TP Connect TP Sky Classic series can be used by TP Connect with an annual flat-rate plan (Japanese only).

The well-balanced proportion carried out for kanji, kana, and Latin tightens the screen. At the same time, it creates a relaxed atmosphere. TP Sky Classic, in which the essence of the proper block style is incorporated in sans-serif typeface － the newest typeface format － is a font family that maintains a classical appearance while remaining simple. Furthermore, the font file size is restrained to the utmost limits by the displayability common to the TP Sky family, with concise and smooth outlines drawn thoroughly. 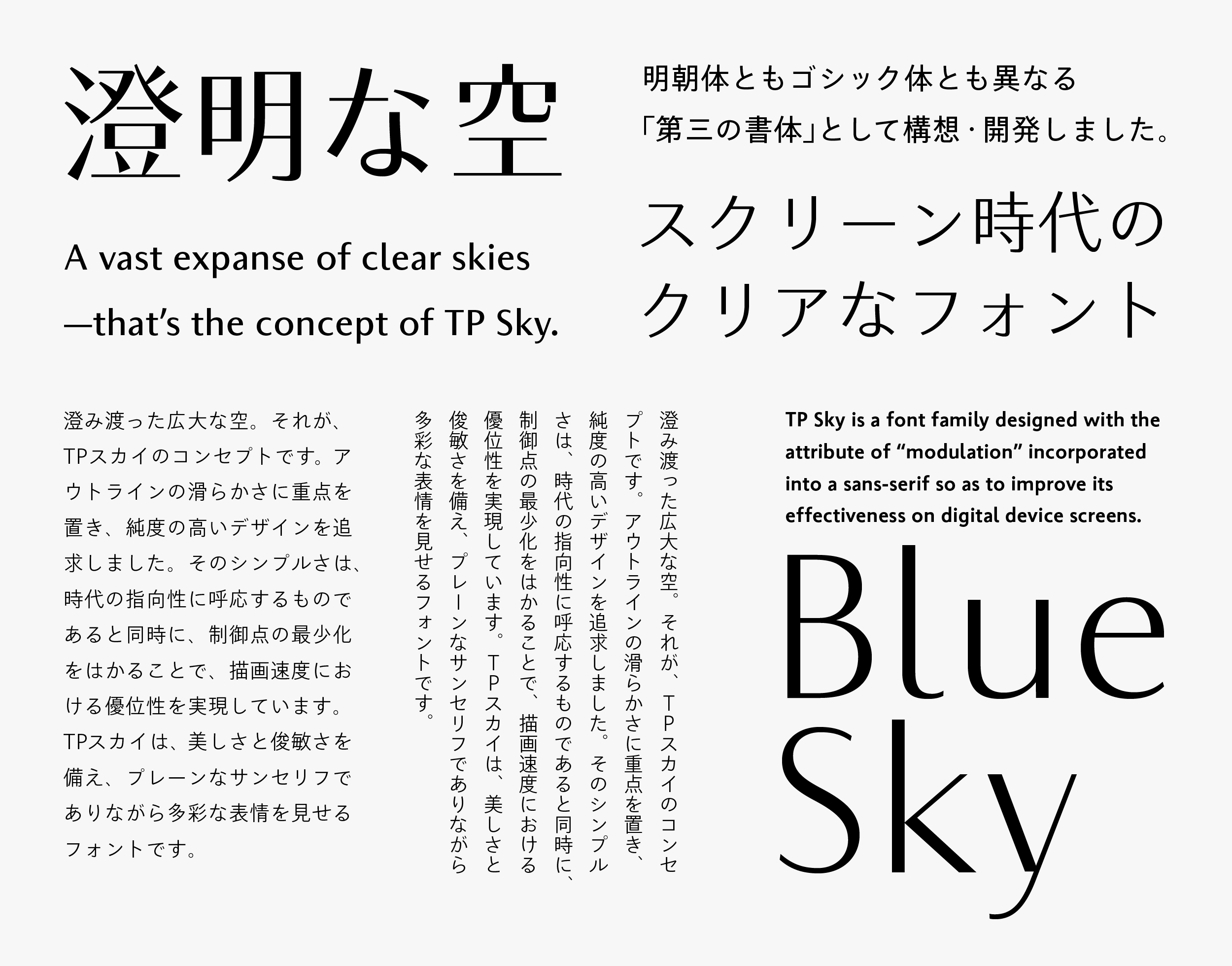 TP Sky is a font family designed with the attribute of “modulation” incorporated into a sans-serif typeface so as to improve its effectiveness on digital device screens. It is available of forty-five fonts in five weights, three contrasts, and three character widths.

An extremely thick weight is achieved in TP Sky Modern Blk by widening the inside space between strokes. This manages both thickness and visibility by strengthening the contrast between straight lines and curved lines, and making strokes longer to allow a generous structure.

Based on the concept of “a vast expanse of clear skies above us” that covers the entire family, TP Sky Classic aims at the expansion of applications in formal scenes, and incorporates a well-balanced block style proportion. The font combines a compact and clear sans-serif typeface and proper classical block style.

Using well-balanced classical typeface for kanji, kana, and Latin as a model, its essence is incorporated in sans-serif typeface. The font combines concise expression and expressive face, an adult calmness along with the force of strokes, and classical image mixed with modern impression.

In Middle Contrast and High Contrast, in which the brush modulation is incorporated in “sweeping,” “point brush,” etc., the classical expression is stronger than in Low Contrast. It can be said that the direction of TP Sky Classic, which is modeled after the proper classical block style, is more clearly shown.

High Contrast with a sharp impression is effective in titles, catch phrases, etc. It is also ideal for product logos with a desire to show high quality. Middle Contrast with an expressive calmness has versatility appropriate for the digital environment. It provides charm to screens that otherwise tend to become monotonous. TP Sky Classic is suitable in formal scenes and content, with a thin weight in Middle Contrast in particular that combines both ease of reading and beauty. It is appropriate for horizontal typesetting and also in long vertical sentences. Although Low Contrast looks as though there is no stroke intensity, there is a nuance of the natural modulation of handwriting when used in large sizes, such as headings, etc. 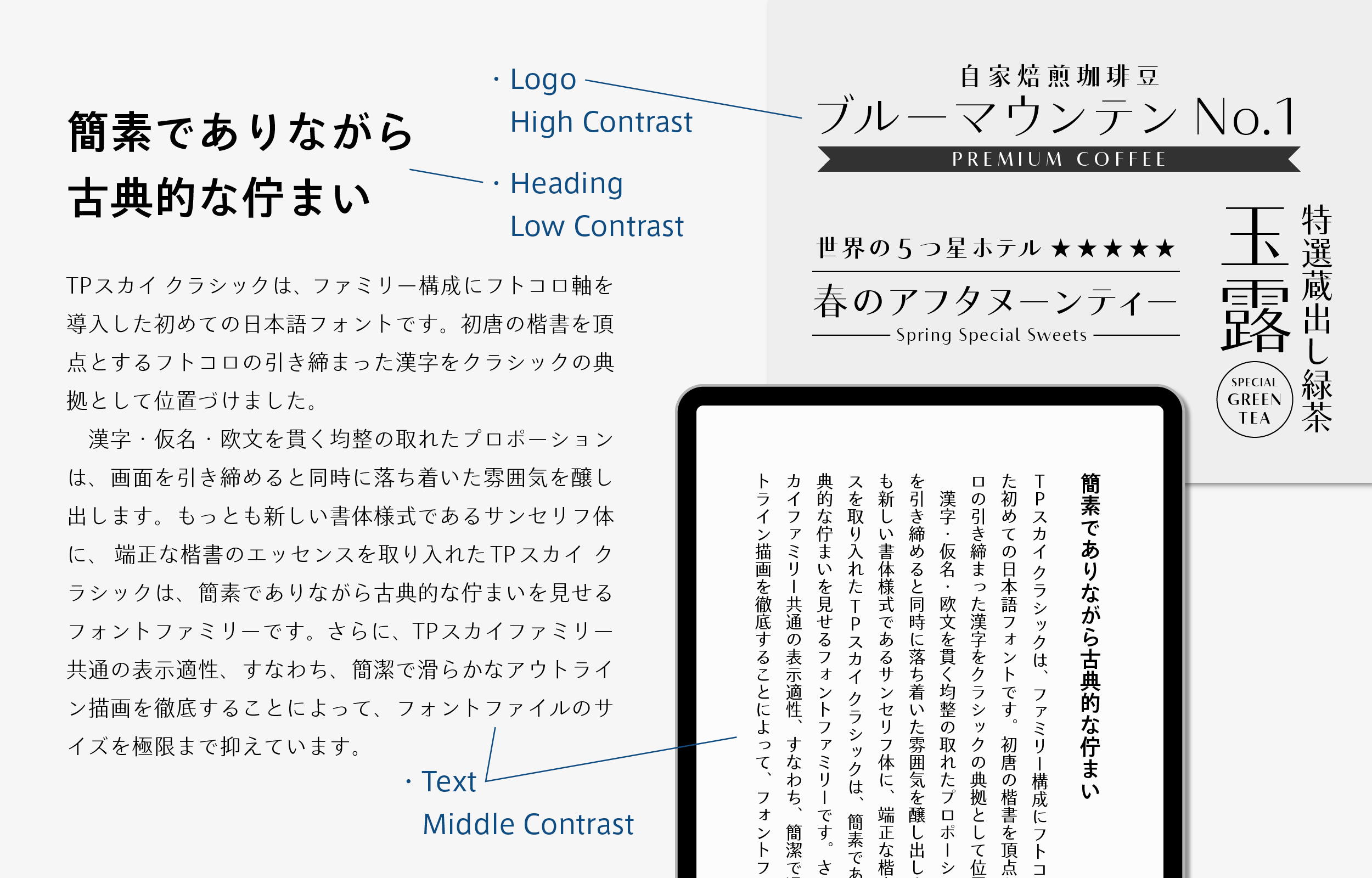 TP Sky Modern gives a plain and flat impression. TP Sky Classic has a classical appearance. A range of new expression has been added to the TP Sky family. 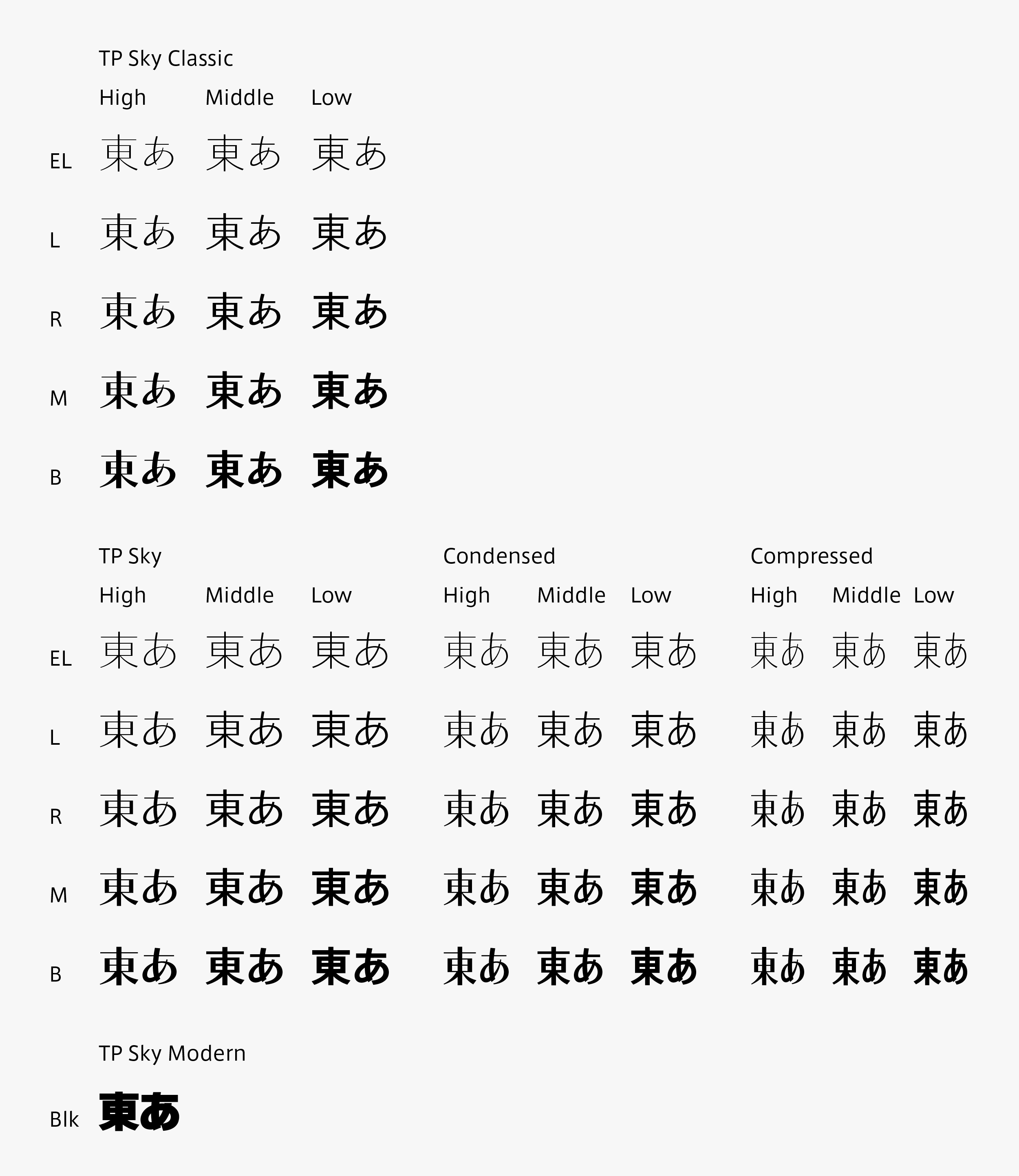