TP Connect Tokyo CityFont can be used by TP Connect with an annual flat-rate plan (Japanese only).

Tokyo CityFont is a font family appropriate for digital signage, information display for public transport, etc., increasing in city spaces. TP Sky Low Contrast is adopted for the Japanese part of Tokyo CityFont, and Latin is newly developed. The Japanese TP Sky has a clear and concise design in pursuit of enhanced visibility. Based on the fundamental design of Japanese, the newly developed Latin has linear style for inside and rounded style for outside; it is designed in consideration of compatibility with buildings in Tokyo.

The family configuration of 15 fonts consists of Basic, Condensed, and Compressed, enabling font selection with an appropriate style corresponding to the scene. By appropriately using three character widths properly when it is required to display information in fixed lengths, such as on information boards, etc., legibility can be maintained along with aesthetics. Superior in flexibility and functionality, Tokyo CityFont is a font family for the next generation for digital signage that illuminates the modern urban space.

Tokyo CityFont is one of the City Font Project launched by Type Project. The City Font Project are experiments in strengthening city identity by implementing city-dedicated fonts as a communication tool. By utilizing Tokyo CityFont in various mediums including architecture, spaces, signage, and catalogs, the image is given consistency, and impression on visitors is strengthened, contributing to the long-term value improvement.

With a concept that would link Tokyo and Edo with “stylishness,” the development of Tokyo CityFont started with an elegant, slender, and modulated style. As a font for the town block indicator plates, the prototype was released in 2015. After that, Latin was developed with simple and solid design, emphasizing visibility. Furthermore, variations of Basic, Condensed, and Compressed were added to expand the family.

The concept of Tokyo CityFont is a typeface design appropriate for information display with a focus on the modern urban space. The central issues were differentiation from a long distance, and stability of display quality. With a family configuration of 15 fonts, it is possible to display the required information efficiently and legibly corresponding to space. When displaying the required information in a limited space, Condensed and Compressed variations are highly effective.

Tokyo CityFont was designed with visibility as a basis throughout the entire family, and has a natural flavor of simple and highly stable design. Making an attempt to harmonize its soft external shape and solid internal shape, Latin has characteristics of architectural shapes, combining embodiment with solidity. Reducing a strong personality and emphasizing on functionality, Tokyo CityFont is a font family with specifically high practicality among City Fonts series. Basic as a main axis, Tokyo CityFont is ideal for signage systems, etc. Also, Condensed and Compressed variations play a significant role on narrow screens. Compressed in particular enables great deal of information to be displayed, effective on smartphones, maps, etc.

L (Light) in Tokyo CityFont is designed to ensure maintenance of space between characters with sufficient inside space, so it is easy to read even in small size. With high stability and readability, R (Regular) and M (Medium) flourish the most in sign systems. Hierarchization of clear and beautiful information can be achieved by using R and M in pair. While simple and flexible in shape, B (Bold) is filled with internal power, showing intelligence and strength.

It is ideal to combine the Tokyo CityFont Basic M and Condensed M together with TP JPN National Parks Minch can expand the functional role of the sign system.

There are three styles of Basic, Condensed, and Compressed in character widths in the family, and each has EL (Extra Light), L (Light), R (Regular), M (Medium), and B (Bold) weights. There are 15 fonts in total for the family configuration. R and M are ideal for signature systems, and L is ideal for text with long sentences. Considering that higher screen resolutions will become popular in the near future, EL is added to the family as a font that appears beautiful in scenery and videos. 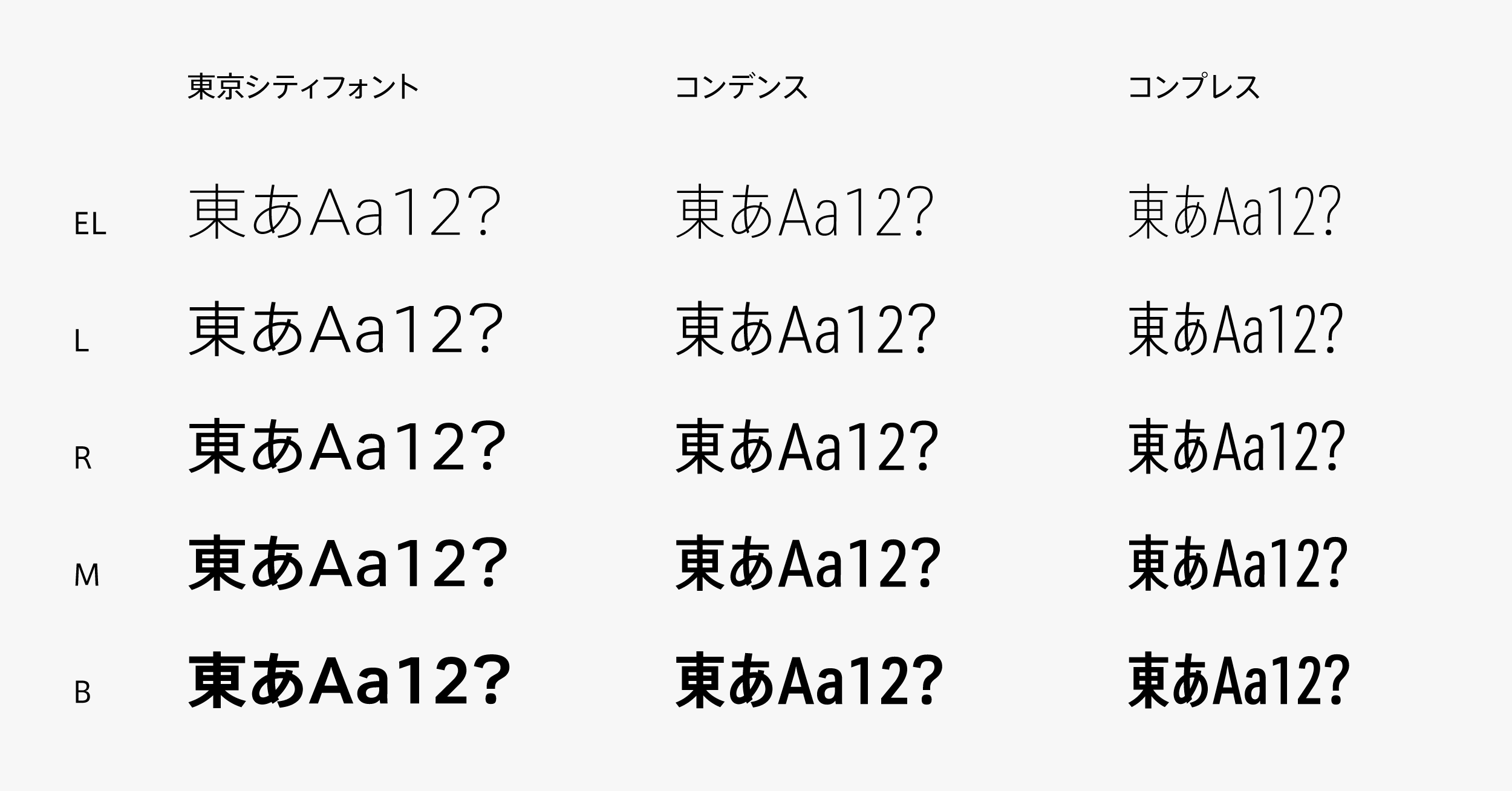