TP Connect TP Meigetsu series can be used by TP Connect with an annual flat-rate plan (Japanese only).

TP Meigetsu is the second release of the Seasonal Font Project by Type Project. It is a Mincho typeface with the fall moon as a theme. In the Seasonal Font series, the classics in different eras are researched, and essence from culture and art from around the world are widely absorbed to propose new typefaces that are suitable for modern times.

In TP Meigetsu, the unique *Fujiwara no Teika handwriting is arranged in the modern style. Teika characters, which stand out among refined old forms of writing, have the features of a noticeably large type face and wide inside space between strokes. Incorporating these features, TP Meigetsu Kana also have wide inside space between strokes with a bright expression. Kanji is matched with the TP Mincho High Contrast family, that also has these features. Latin is matched with Kana where the inside space between strokes is widened. While designing the overall characters with slightly wide character shapes, the typeface brings a pleasant reading rhythm with its lightweight strokes. Latin characters that harmonize with Master Teika are newly transcribed, finishing the script with an atmosphere that gives the impression of moonlight. The combination of Kanji and Kana, and the crossing and blending of Japanese and Latin are the highlights of this Seasonal Font.

*Fujiwara no Teika
A court noble and poet from the late Heian and early Kamakura periods. He wrote many treatises on poetry apart from editing the “Shin Kokin Wakashu” and “Ogura Hyakunin Isshu.” The style of calligraphy called “Master Teika” has the feature of writing pressure quality with extreme intensity, using a great deal of ink with the brush. 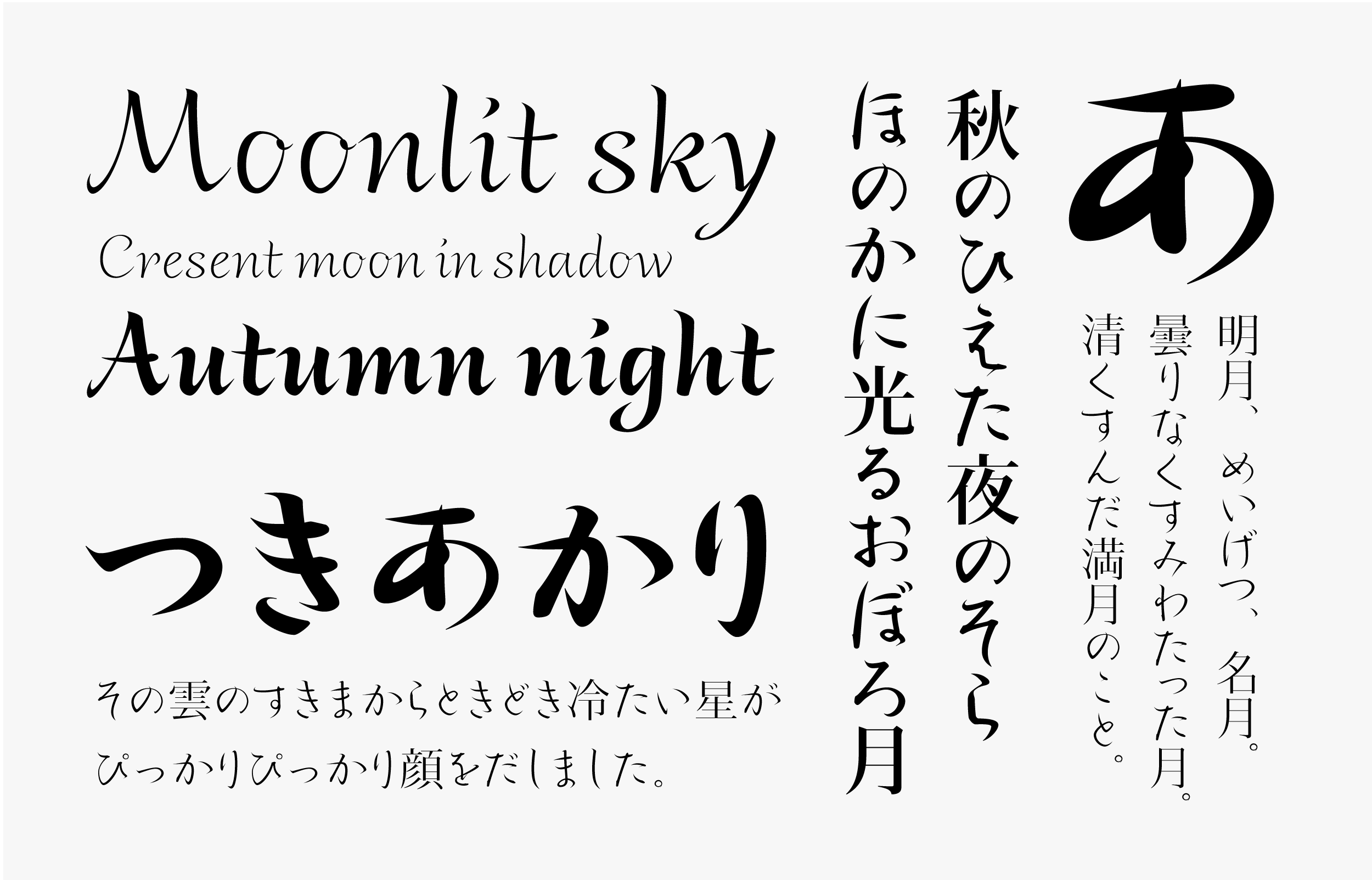 TP Meigetsu is a typeface that gives the image of the moon shining in a clear fall sky. The name “Meigetsu (a bright moon)” is taken from “Meigetsuki” diary written by Fujiwara no Teika for 56 years. Absorbing the essence of Master Teika, TP Meigetsu has a clarity that is still applicable to the present. Also, Teika’s tankas (short Japanese poems) and calligraphy influenced later performing art culture (Noh and tea ceremony) significantly, and holds a unique position for a long period of history. To show respect to Teika, who transcribed many classics passed down to posterity, the typeface was created with the aim of becoming a bridge between poetry and prose. 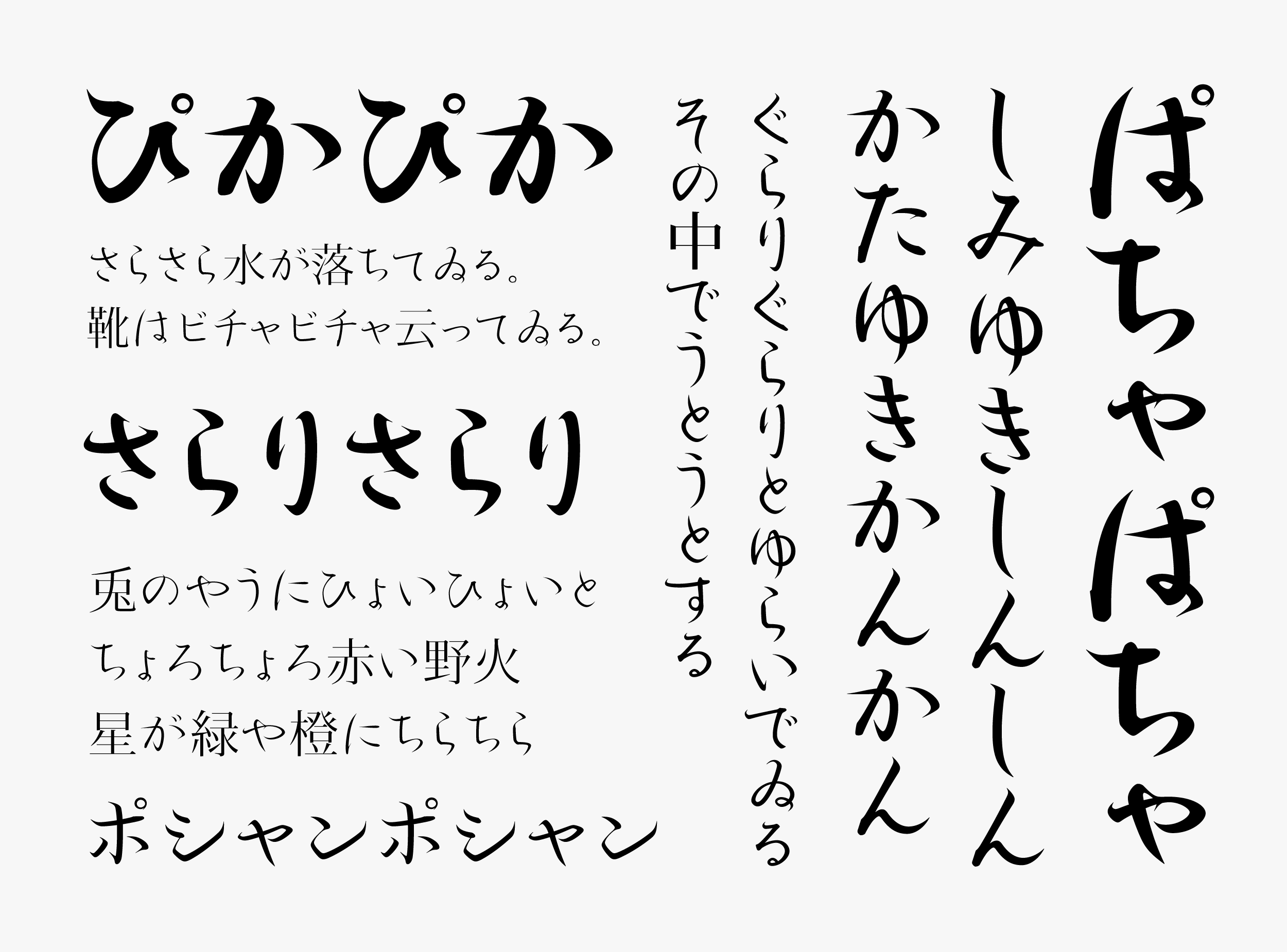 The Seasonal Font Project is an attempt to enrich and express the Japanese language more delicately by designing a typeface reflecting seasonal features and putting an atmosphere of each season into the characters. Incorporating high-quality culture from all eras and countries and delivering it all to the future through characters and typefaces is the concept behind the Seasonal Font Project. Modeled in Teika’s handwriting, which values differentiation between each character, TP Meigetsu is a highly practical typeface providing ease of reading applicable to the present. The Seasonal Font Project aims to incorporate seasonal features into typefaces, enrich the language, and color the characters beautifully. 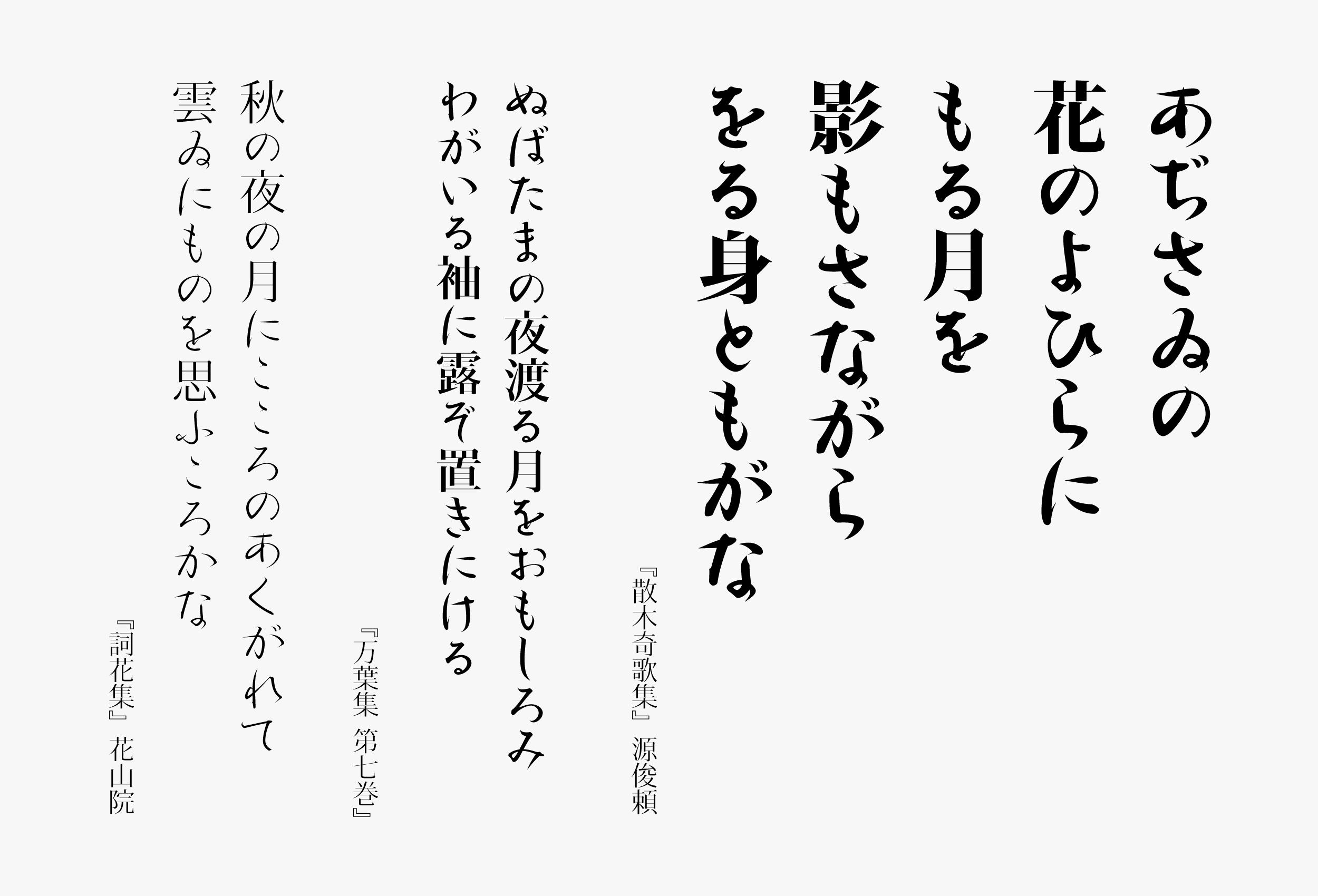 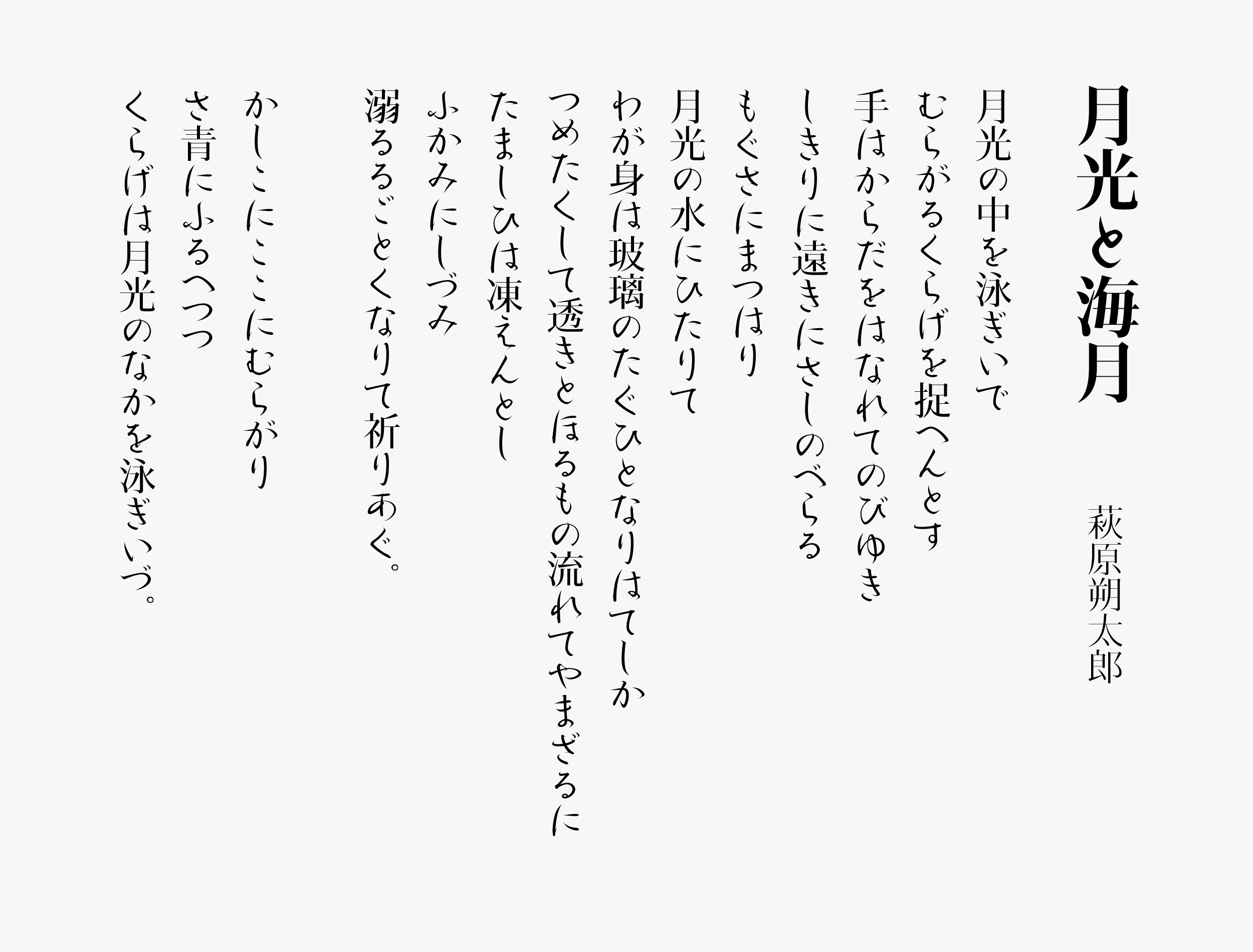 “Moonlight and Jellyfish” by Sakutaro Hagiwara

The primary feature of TP Meigetsu is its well-modulated stroke, from the sharp beginning of each brushstroke to the thick ending. Among old forms of writing, which tend to have vertically long proportions in many cases, a unique form with a sense of flatness is also a major feature of Master Teika’s writing. In TP Meigetsu hiragana, these 2 features are clearly expressed. The calligraphy of Teika is one of the few classic Kana that can be matched with Kanji that have large typefaces and wide inside space between strokes. As there are few unbroken lines, a style specific to *onnade, each character is free-written to prevent misreading, reflecting a modernity approach in consideration of readability. For katakana, ** “Okuiri: The Tale of Genji,” written by Teika himself, is used as a model. Original vertically long katakana written on the right side of Kanji are arranged to match hiragana with wider inside space between strokes. Similarly, an unprecedented Latin typeface is designed with cursive script that does not write in successive characters, beating out a light rhythm while maintaining ease of reading.

*onnade
To originate from the fact that women, who were restricted from using kanji, used hiragana in writing songs and diaries in the Heian period.

**Okuiri: The Tale of Genji
A commentary written by Fujiwara no Teika in the Kamakura period that studies the historical events, source, poem quotations, etc. in the Tale of Genji. 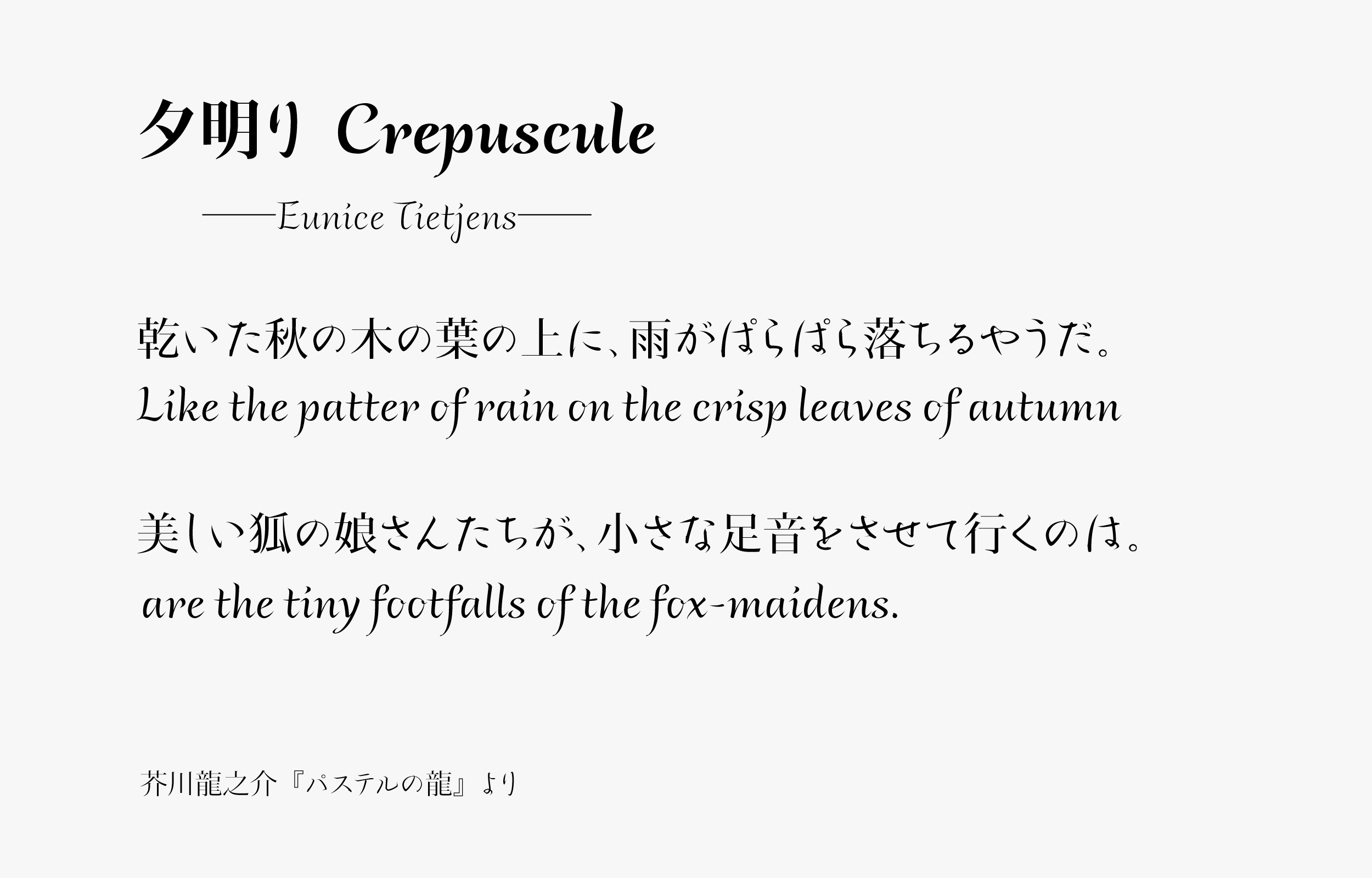 To draw the image of a bright moon closer, the moon shape is incorporated in parts of characters to give an atmosphere of moonlight to the design.

The TP Meigetsu consists of 6 weights, from EL (Extra Light) to H (Heavy), with an axis in high contrast, giving a sharp impression. From M (Medium) to B (Bold), the thickness is close to Teika’s handwriting used as a model. While there are many delicate old writings, this is a rare family that covers the thick weight. The sharp beginning of brushstrokes and high contrast are figurative metaphors for shining moonlight, and the thickness of character reflects the phases of the moon. The Seasonal Font is a project that embodies the endemic mixability of the Japanese culture by combining the 3 character systems of Kanji, Kana, and Latin into single typefaces with seasons as the foundation. Please utilize the elaborated Seasonal Font series in the enhanced typeface family. 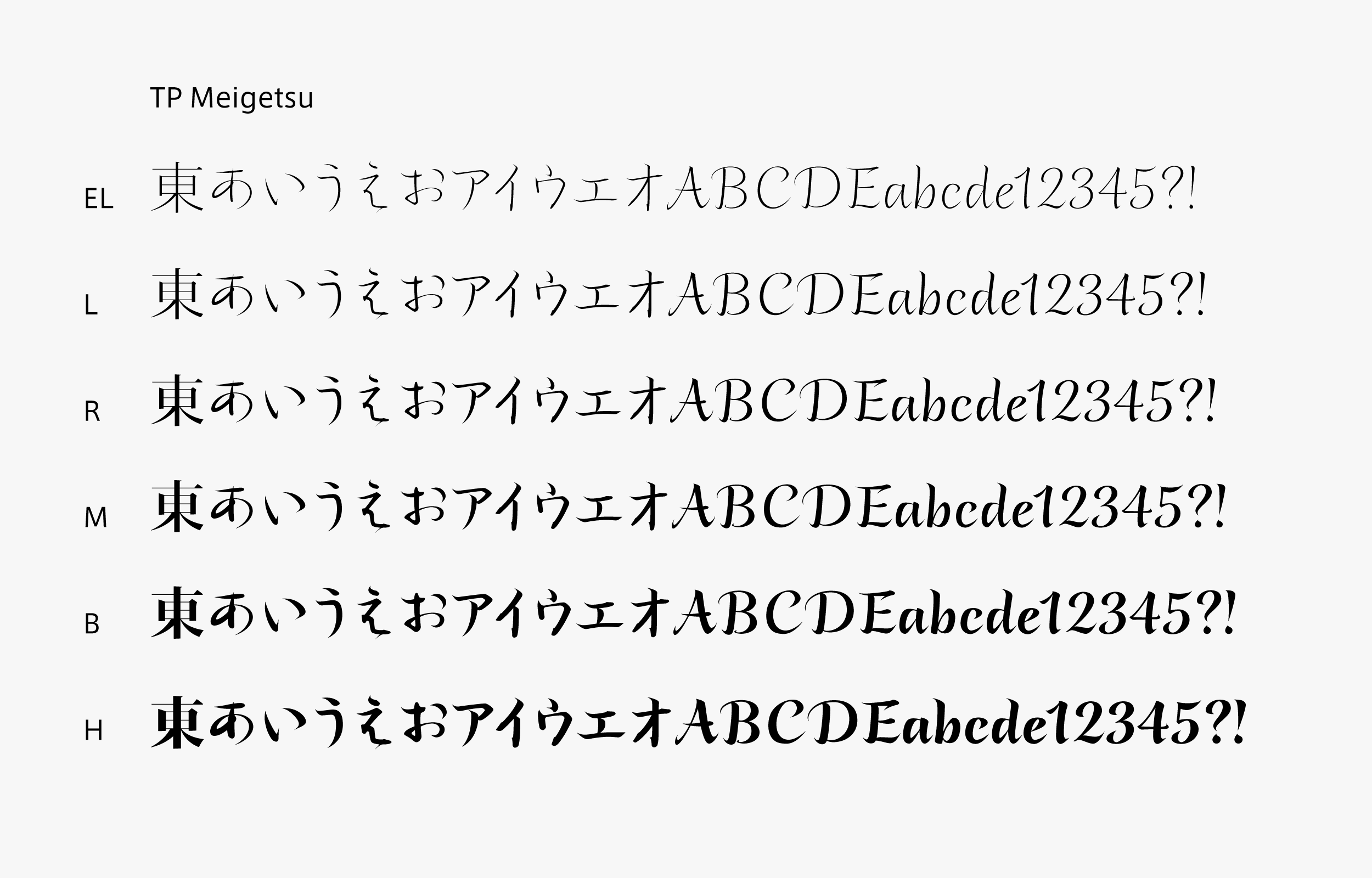