Hama Mincho’s (Hama refers to Yokohama and means ‘beach’) design incorporates the scale and distinctive character of the city of Yokohama, and for styles that accentuate vertical/horizontal stroke contrasts. On the basis of impressions of Yokohama that were gained through fieldwork, and more than 2000 phrases that were collected from local residents in a branding program held on the occasion of the 150th anniversary of the opening of the city’s port, the following key phrases were chosen: ‘A stylish town’, ‘A port alongside history’, and ‘Coexistence of tradition and new things’. The 24 font family of Hama Mincho is created with the aim of expressing the city of Yokohama’s broadmindedness with these phrases in mind.

Since the port opening, we have regarded a climate in which a new wind had been brought into the city from the port, and this is one of the identities of Yokohama that continues to the present age. We have adapted the image of “Port of Town” as seen from the sea, such as Osanbashi Pier, the Red Brick Warehouse, the Landmark Tower and three Yokohama towers which have been given the nicknames the King, the Queen and the Jack, used as landmark by former sailors.

Hama Mincho Italic is designed to recall the wind and waves of Yokohama with an overall flow line shape. Although the typical Latin italic typeface is assumed to be used along with the regular Latin typeface, Hama Mincho Italic is created with the aim of playing the role of a display typeface even by itself.

Harmonizing features by weight in the regular style, there are parts in which the shape and proportion of individual letters are intentionally changed from the regular style. In contrast with the design of regular that is close to a high contrast, simple kanji, the italic typeface is finished with the impression of kana, with the soft atmosphere of a remaining hidden ink brush connection.

This is a Mincho typeface that accentuates thickness variations and vertical/horizontal stroke contrasts, evokes in its horizontals the ferries that traverse the harbor, and in its verticals the city’s tall buildings seen from the ocean. The styles that accentuate vertical/horizontal stroke contrasts, Hama Mincho is created with the aim of expressing the city of Yokohama’s broadmindedness and openness to adopting new things. Thickness variations have been included while maintaining design consistency, so as to enable use for titles and headings, and to accommodate main text and footnote situations as well. For Latin that gives a sense of port likeness, such as images of flags flapping in the wind and an anchor, modern Roman typeface is adopted in consideration of harmony with kanji. 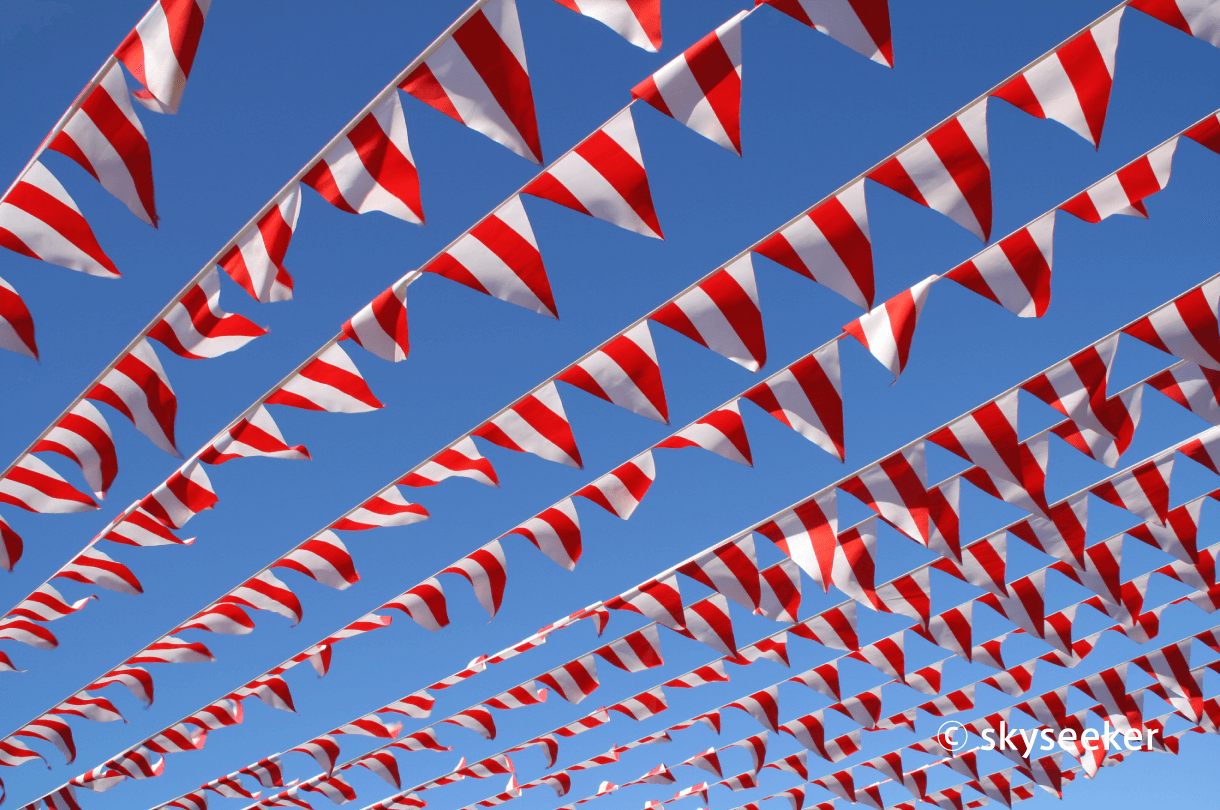 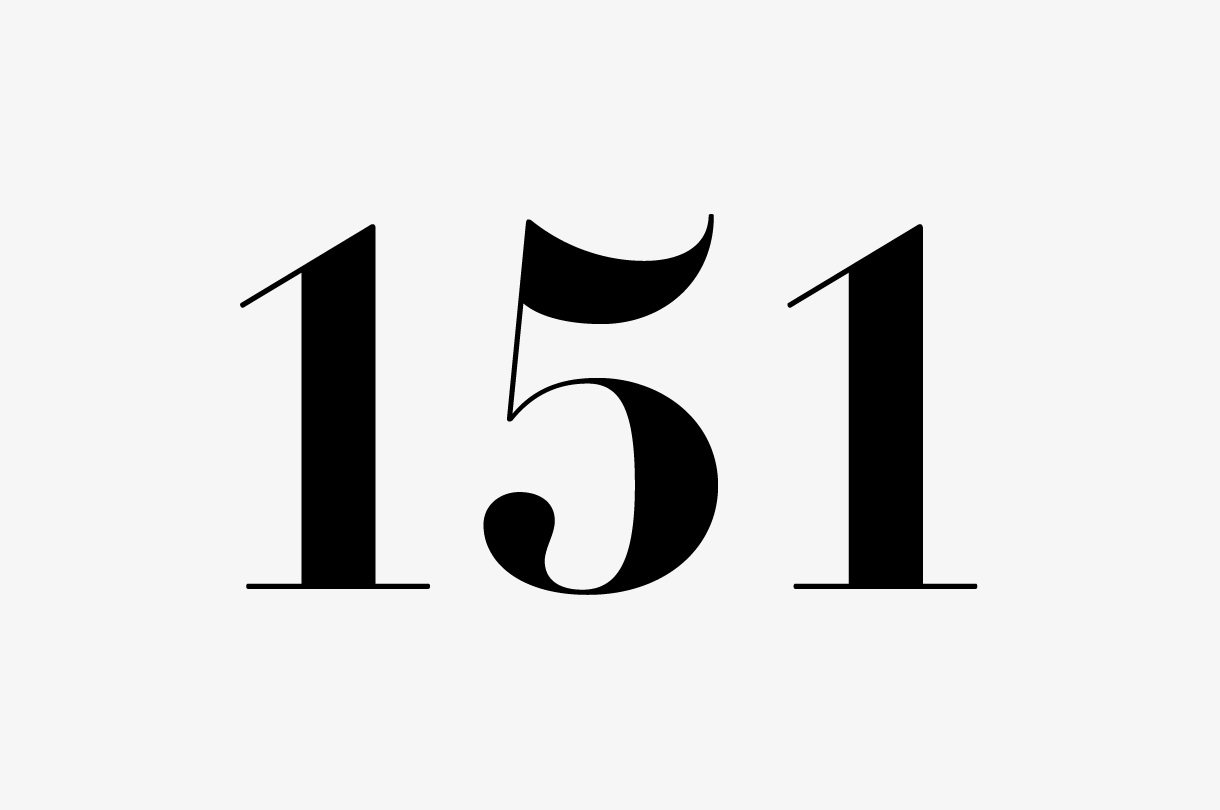 The letter structure of Hama Mincho Italic differs depending on the variation. In high contrast, thick fonts, such as Display H, etc., a soft and rounded modern Roman style design similar to regular is adopted to give a glamorous atmosphere that stands out in large sizes. In low contrast, thin fonts, such as Caption EL, etc., the narrowed classical italic structure is adopted to give an easy-to-read design for use in small sizes or longer sentences. 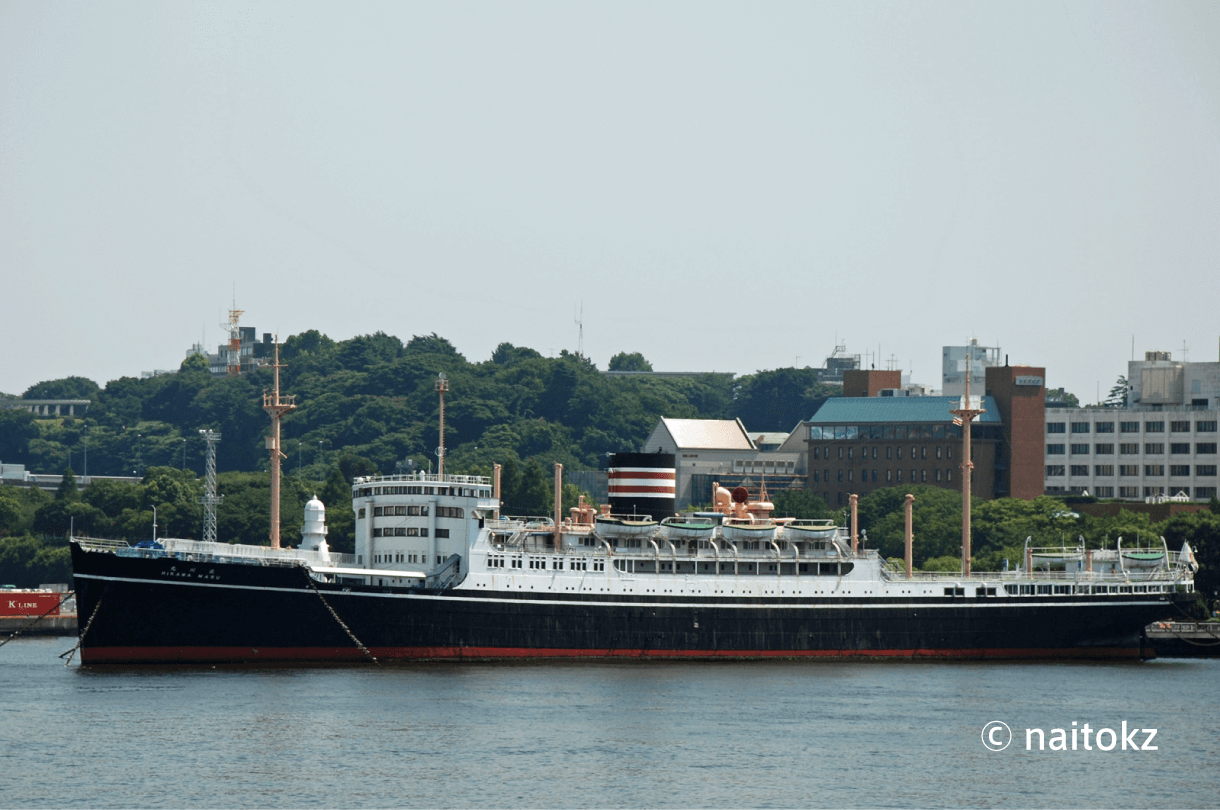 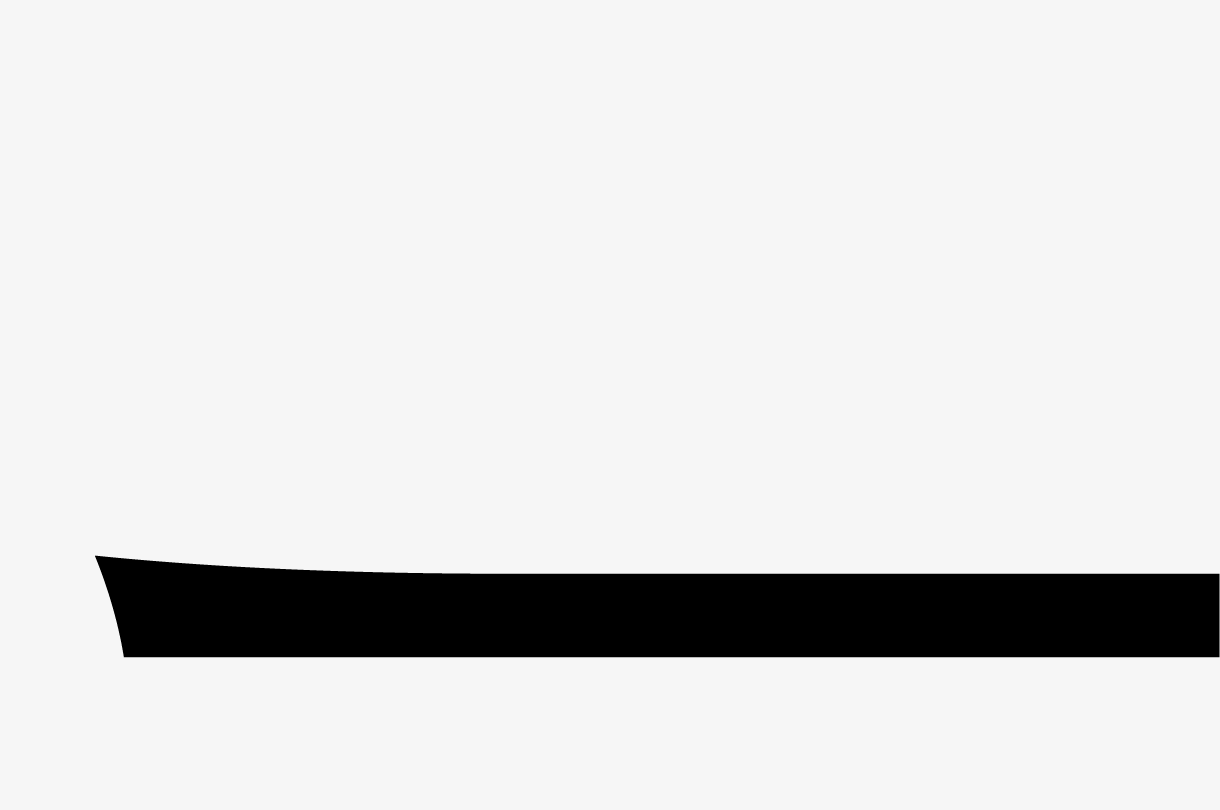 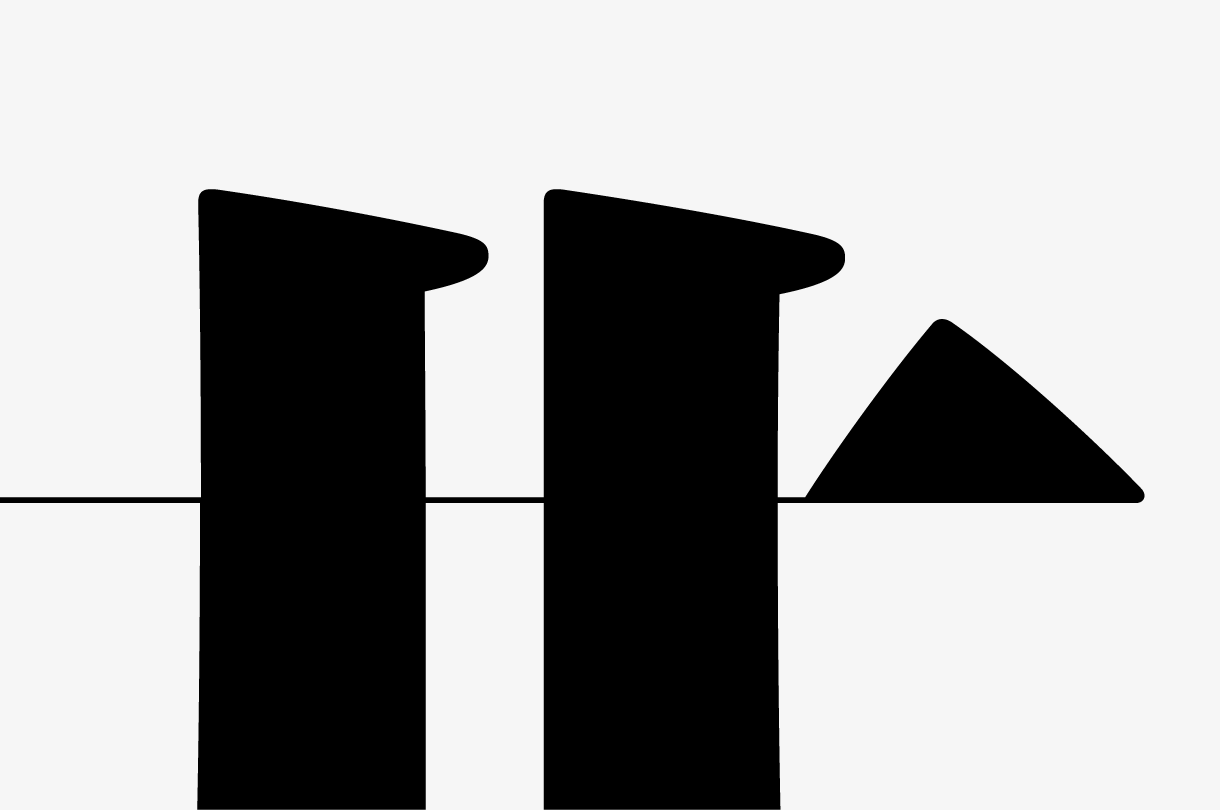 In addition to differences in design per variation, ligatures, proportional numerals, and old style numerals are added in Hama Mincho Italic. In ligatures with ornamental design, such as ‘st’, ‘fy’, etc., a bow shape line is adopted in the ascender (the upper part of a lowercase letter) and the descender (the lower part of a lowercase letter). This design, with the impression of a wave form, provides glamour to writing. In addition to monospaced lining numerals with the same height, proportional numerals that can further smoothen the flow when arranged are also included. In addition to the original application of blending numerals with lowercase letters in long sentences, old style numerals can provide movement in the text due to letters uneven in height in the case of arranging just a few letters, such as in a heading, etc.

Also, the letter form of lowercase letters ‘v’ and ‘w’ changes depending on the variation. In Display and Headline, that assume the use in large size, a V-shaped letter form that emphasizes individuality and provides a sense of speed is adopted. In Text and Caption, a U-shaped letter form is adopted to blend in with other letters and promote smooth reading experience even in a long sentence.

Hama Mincho’s design incorporates the scale and distinctive character of the city of Yokohama, and for styles that accentuate vertical/horizontal stroke contrasts. Thickness variations have been included while maintaining design consistency, so as to enable use for titles and headings, and to accommodate main text and footnote situations as well. And for styles that accentuate vertical/horizontal stroke contrasts, the usage range extends even further. Hama Mincho is designed as a family series, with the four categories of Caption, Text, Headline and Display, each of which is available in six weights. 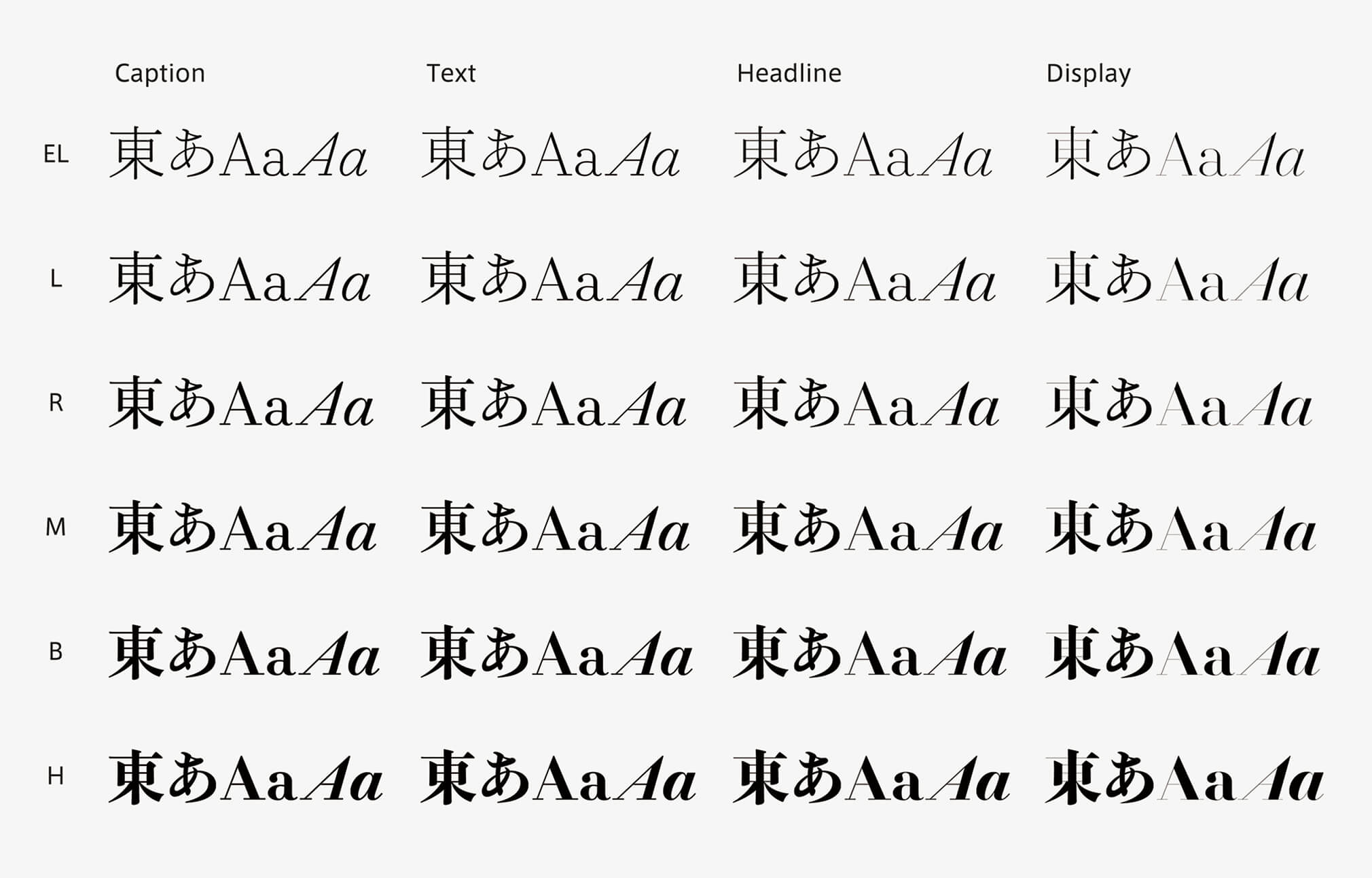